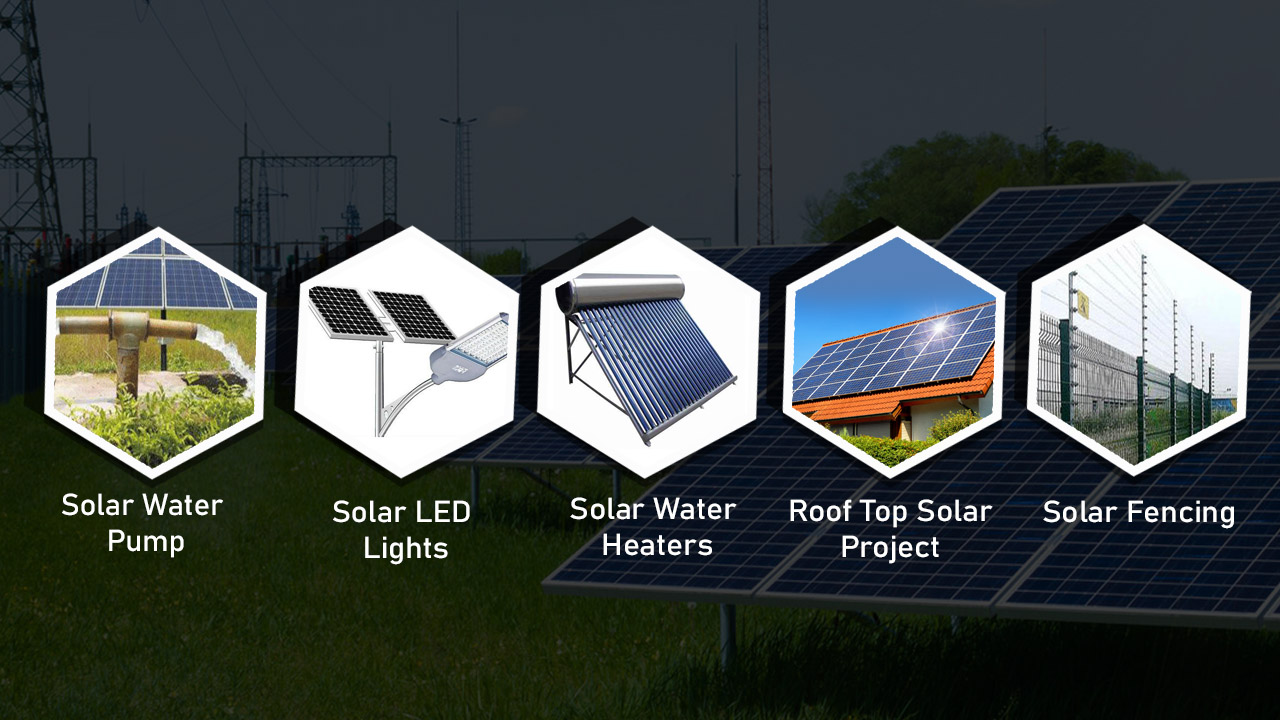 A solar water pump or a solar photovoltaic water pumping system is a system powered by solar energy. It is just like the traditional electric pump with the only exception that it uses solar energy instead of fossil fuel or electricity.

The photovoltaic array converts the solar energy into electricity, which is used for running the motor pump set. The pumping system draws water from the open well, bore well, stream, pond, canal etc. The system requires a shadow-free area for installation of the Solar panel.

Solar LED street lights rely on the photovoltaic process, which allows the solar cell to convert sunlight into usable electrical energy. This is done when negatively-charged electrons push solar energy into positively-charged spaces in the cells.

Solar water heating is the conversion of sunlight into heat for water heating using a solar thermal collector. A variety of configurations is available at varying cost to provide solutions in different climates and latitudes. SWHs are widely used for residential and some industrial applications.

The solar water heater absorbs light by means of a collector placed on the roof and converts it into heat. It passes this heat to a water tank by means of a circulating pump. This exchange is triggered by the thermal regulator, but only when the collector is hotter than the water in the tank.

A rooftop photovoltaic power station, or rooftop PV system, is a photovoltaic system that has its electricity-generating solar panels mounted on the rooftop of a residential or commercial building or structure.

When the sunlight hits the solar cells on a rooftop solar panel, it converts particles of sunlight (photons) into electrons of direct current (DC) electricity.

A solar fence works like an electric fence which delivers a brief yet fierce shock when human beings or animals come in contact with the fence. The shock enables a deterrent effect while ensuring that no loss of life is caused.

However, unlike normal electric lines or battery-powered fences, a solar electric fence charger use a small solar photovoltaic (PV) panel to collect and convert sunlight into energy, which is then stored in the battery so that it can charge the fence.